He graduated with a degree from the University of California Los Angeles, Family Nurse Practitioner program. His Undergraduate degree was obtained from the Azusa Pacific University. He enjoys fly fishing, backpacking, and golfing with his daughter. 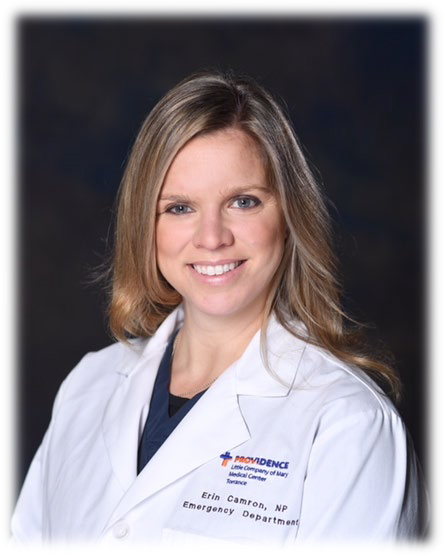 Erin attended Cal Poly San Luis Obispo and obtained her bachelor’s degree in nutrition science in 2005. She continued her education at UCLA where she received her master’s degree in nursing in 2008 and her post master’s in acute care gerontology in 2013. She obtained and maintains board certification as an Acute Care Gerontology Nurse Practitioner through the ANCC.

Erin began her nursing career at Little Company of Mary in 2008, working as an RN in the Emergency Department. From there, she went on to work at Cedars Sinai in Los Angeles, where she expanded her emergency medicine expertise by obtaining trauma experience. After obtaining her NP license, Erin worked for two years in an under-served area of Los Angeles at Good Samaritan Hospital.

Most recently, Erin has worked as an NP in the emergency departments of Lakewood Regional Hospital and Little Company of Mary in Torrance.

In her leisure time, Erin enjoys living in the South Bay with her husband and young son and participating in a variety of recreational activities.

Gina has been an RN since 2002 after she received her BSN from Azusa Pacific University. She initially worked at St. Joseph Hospital of Orange County then transferred to Hoag Hospital in Newport Beach to work in the emergency room in 2003. Five years later, she received a Master’s Degree at UCLA School of Nursing in Acute Care along with her Clinical Nurse Specialist.

Gina Has worked in the emergency room for 13 years. Her first job as a Nurse Practitioner was at Harbor General emergency room in 2008. She then moved on to Little Company of Mary Torrance Emergency Room in 2011 and continues to work there part time. She is nationally certified through the ANCC as an acute care nurse practitioner (ACNP-BC). 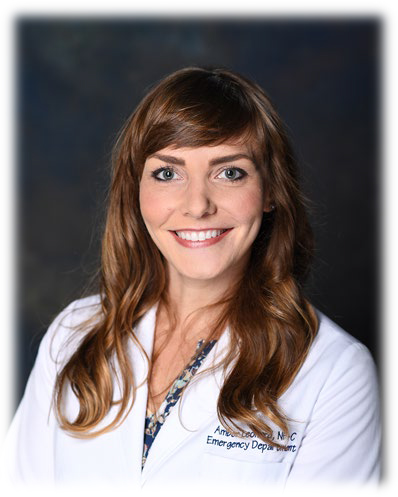 Amber attended University of California, Santa Barbara and obtained her Bachelor’s degree in Psychology in 2005. She then attended Mount Saint Mary’s University where she obtained her second Bachelor’s degree in Nursing in 2008. Prior to becoming a Nurse Practitioner, she worked as a RN for 8 years at Torrance Memorial Medical Center on the Cardiac/Telemetry Unit and the in Emergency Department. Amber obtained her Master’s degree in Nursing and Family Nurse Practitioner certificate in 2013 from California State University, Long Beach. Amber started working in the Emergency Department at Providence Little Company Mary Torrance in March 2016. 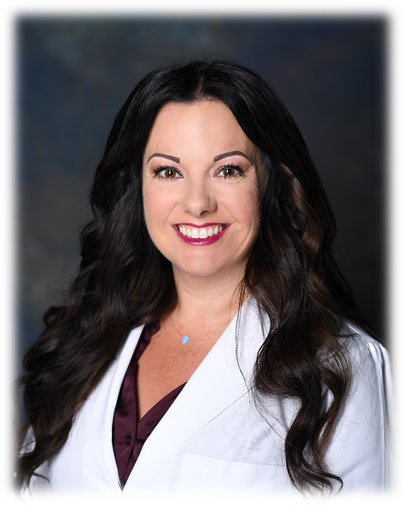 Carrie obtained her RN from Cerritos College in 2003. She started her nursing career on the cardiac telelemetry unit at PIH Health in Whittier later working in the Emergency department. She then obtained her Bachelor’s of Science in Nursing from Cal State Dominguez HIlls in 2013. She continued working in the Emergency Department while obtaining her Masters of Science in Nursing from Cal State Long Beach, becoming a Nurse Practitioner in 2016. She is nationally certified through the AANP in Family Nurse Practitioner. Carrie started working in the Emergency Department of Providence Little Company of Mary in 2017. Outside of work, she enjoys spending time with her 3 children.

Stefanie joined the medical staff as an emergency department nurse practitioner at Providence Little Company of Mary Medical Center Torrance in 2017. She attained her Bachelors of Science in Biology from the University of California, San Diego in 2003 and then a second Bachelors of Science in Nursing from Simmons College in Boston, MA in 2007. She then headed back to California to start her nursing career by working as a Neonatal ICU Nurse at various hospitals including UCSD Medical Center, Cedars-Sinai and UCLA Medical Center. She attained her Masters of Science in Nursing from UCLA in 2013 and worked as Family Nurse Practitioner in retail health before transitioning to the emergency department. Stefanie is board certified by the American Nurses Credentialing Center (ANCC) as a Family Nurse Practitioner. She enjoys reading, traveling, crafting, and spending time with her husband and daughter.

Linda joined the Emergency Department at Providence Little Company of Mary Torrance in 2017. She received her first Bachelor of Science degree in microbiology from UCLA and her second Bachelor of Science degree in nursing and masters of nursing degree from California State University of Long Beach. In her free time she enjoys traveling, golfing, and trying new cuisines.